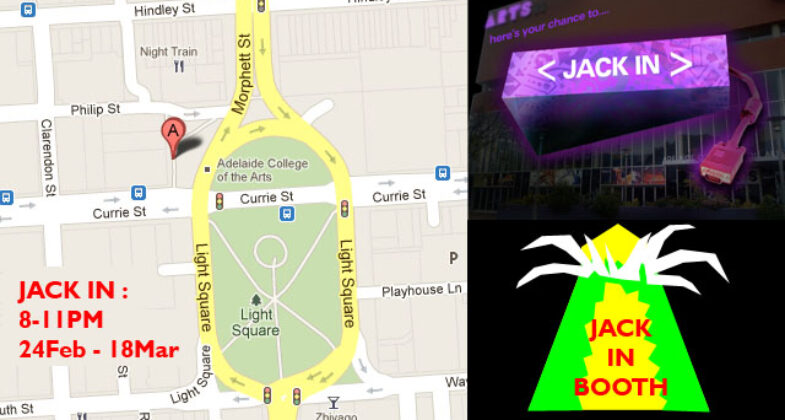 During the 2012 Adelaide Fringe, the Adelaide College of Arts building will be transformed with an interactive projection concept, created by students working with Illuminart (a South Australian media arts company).

Look for the JACK IN Booth at Shimmering West, Light Square. At the booth the JACK IN crew person will help you jack in.

There is a VGA cable for your video output and an audio cable for audio output (if needed). Your computer may need an adaptor (for example if it is a mac laptop). We have a range at the booth but we recommend you bring your own adaptors you normally use to adapt to VGA.

The material you bring to share should be your own original material or with permission to use it. Please also consider the public nature of the JACK IN space and don’t show anything that will get you or us into trouble. You can jack in as long as you like but don’t hog it if other people want to use it.

What do I need?
Your laptop with some content or application you want to show.
If you have a non-vga video port, it is a good idea to bring an adaptor (we have some but can’t guarantee to have every kind available!)

Who’s there?
A JACK IN crew member is there to help you jack in between 8PM – 11PM (may finish earlier or later depending on how busy the night is) and audience, especially if you invite friends. Tell us when you are showing up and we’ll come and watch!

What can I show?
Yes, you can show photos, videos, short films, you can play a computer game, set up photo booth or play something off the internet. You can scribble with “paint” or photoshop. You can set up a live camera feed from your webcam.
It’s up to you… do you have photos you’d like to see “building sized”? Have you made animations or films? Do you have a favourite video game? Got a video on vimeo or youtube?  Great… come and share it with us, invite your friends and blow it up big.

Anything audiovisual is ok provided its suitable for presentation in a public space – so please – nothing violent or extreme that’s going to land you (and us) in trouble AND you should have permission or copyright ownership of anything you screen.

Sound and music? Yes there is an audio Jack in, and you can just play some music without video if you want to.

What formats will work?
If you have a video port on your laptop, you can output standard VGA (1024×768) and
this is perfect for us to connect and switch to.

What about super wide images, like the JACK IN rolling animations?
If you want to try having one very very wide image across the building, this is the advanced option, you will need to build some custom content (3072×768) and install the matrox drivers prior to visiting, and JACK IN using the matrox system on site.

Can more than one person JACK IN? Yes, it’s a little more complicated but up to three people can play at one time. If you decide to do it, take some photos so we can see how cool that looks!

What’s that picture we’re projecting onto? The silver balcony is like a mirror and doesn’t work for projection, so with the help of VisualCom we have been able to cover it with a massive artwork created in collaboration between Illuminart and students of AC Arts (especially Liesbeth Pockett). This original concept involves a DAYTIME artwork of a giant student’s art journal and sketches of the building’s windows that at night is transformed with animation and mapped projection… and your contribution too!